I have been working for some time on a campaign to reduce the number of injuries suffered by hedgehogs from gardening activities such as strimming and mowing. During Hedgehog Awareness Week 2022 I was so pleased to announce the first major step forward in this campaign. You can find out more by visiting the Campaigns page.

If you would like to make a donation to hedgehog rescue centre I take poorly hedgehogs to, please click on the link below. Every penny goes directly to them. Thank you. 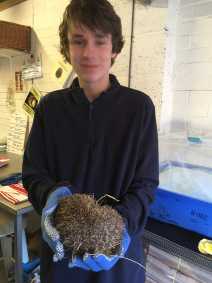 HedgehogAware came about after I discovered hedgehogs in my garden during the Summer 2020 lockdown. I was 13 at the time and since then have learnt all I can about one of the UK’s most loved mammals – the Erinaceous Europeas – and decided to do as much as possible to help them not only survive, but thrive.

As a local Hedgehog Champion, I do a lot of work to raise awareness of the plight of hedgehogs. I am a guest speaker at gardening clubs, WI meetings, and schools, have exhibited at community events, and spoken on various media channels including Radio One and the BBC One Show. I don't ask for a 'speakers fee' but donations made go to the volunteer rescue centre I fundraise for, and take poorly hedgehogs to.

As part of the annual Hedgehog Awareness Week I run live-stream events giving tours of my garden, discussing how to make gardens hedgehog friendly, looking at options for wildlife cameras, talking with local rescue centres, and answering questions. The most recent event was on 7th May 2022 - you can subscribe to my HedgehogAware channel to receive updates and watch previous recordings.

I'm an award-winning filmmaker, with my film 'The Wonderful World of Hedgehogs' winning the Best Narrative Film (Documentary) in the 11-15 years age category of the University of South Wales's Film and TV Schools Wales Schools and Colleges Awards.

The film has become one of the top viewed favourites on the Hedgehog Street's YouTube channel and in March 2022 was shortlisted in the 'Best Documentary' (under age 19) Film the House Awards, where I attended the ceremony at the House of Lords.

My work as a Hedgehog Champion has been featured in the Autumn Edition of Wildlife World published by the People's Trust for Endangered Species, and in many other publications including: Daily Telegraph, South Wales Argus, Sunshine Radio, Free Press, Leamington Observer, Matters Magazines, and News Break. My ‘Make a Hoggy Highway’ took third place in a national poetry competition in the Young Wild Writer Competition 2021. I was also featured in the BBC Wildlife magazine, Spring Edition 2021.

In December 2021, my work was recognised as part of the Radio One 'Teen Hero' initiative. I had a great time speaking with Radio 1 breakfast host Greg James about my work, and chose a song as part of the 'ten minute takeover'. On 6th May 2022 I featured on the BBC One Show as part of Hedgehog Awareness Week 2022.

Following the BBC One Show feature I was sent this wonderful picture drawn by Kitty from Norwich, who has been telling her local neighbourhood all about Hedgehogs and how to look after them during Hedgehog Awareness Week. It's great to see young people involved in helping hedgehogs and going out and about in their local communities to spread the word. Well done Kitty, you will be first to appear in my just launched 'Young Hedgehog Helpers' Wall of Fame! If your child/ren would like to be featured, or they have a hedgehog drawing they would like to be displayed, please get in touch with me through the Contact page. 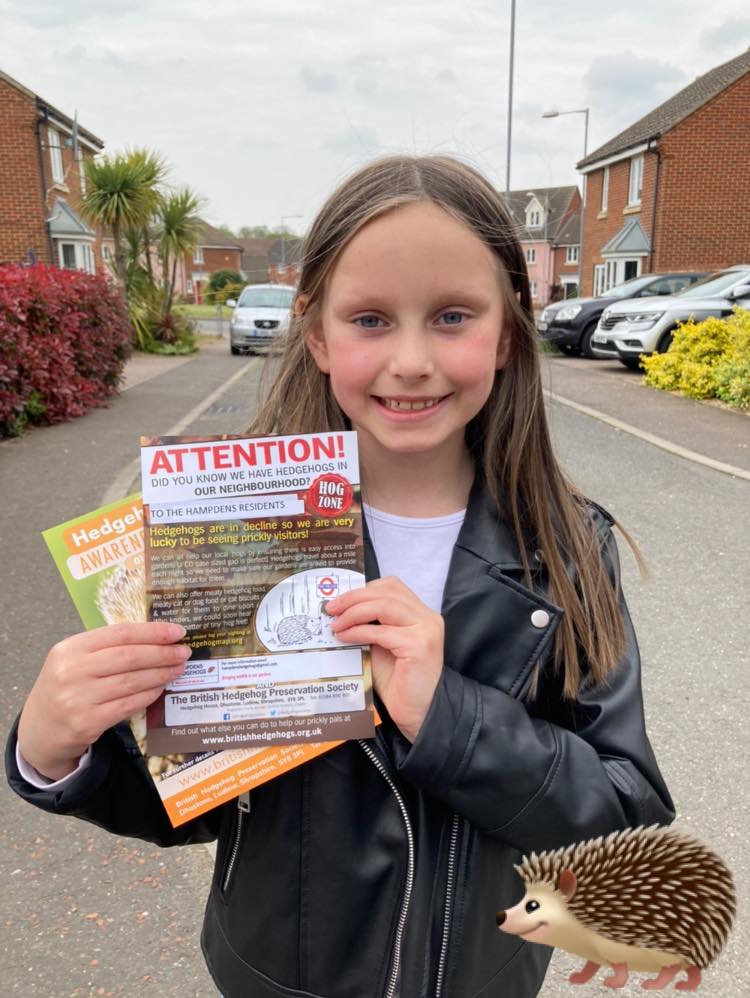 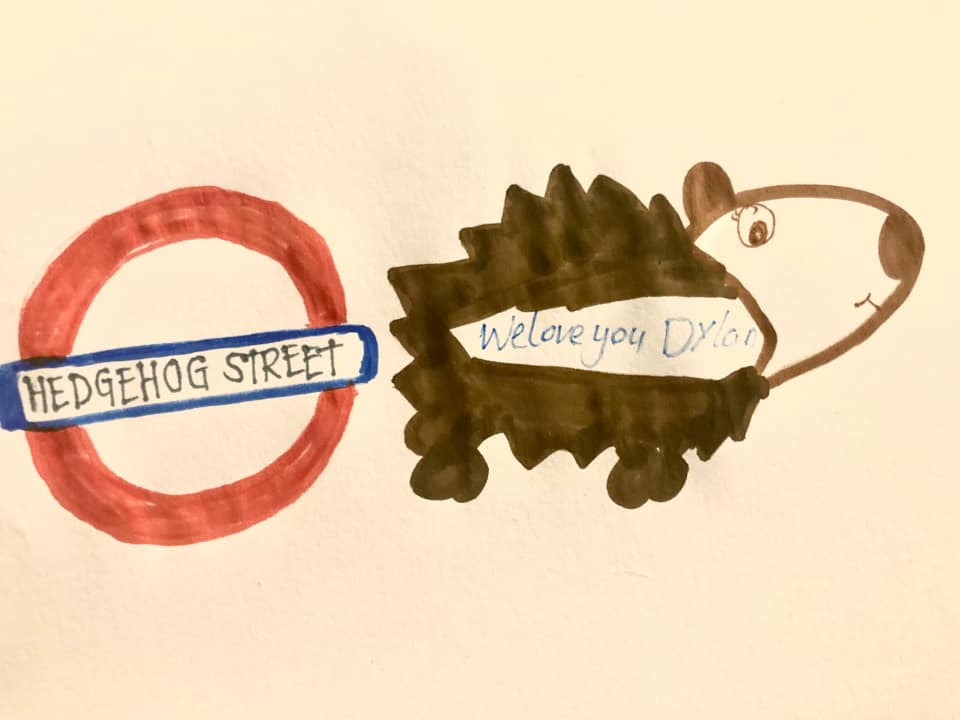 HEDGEHOG RESCUES
I have been called out on many ocassions to rescue hedgehogs which may be injured or poorly in my local area, including being caught in netting, fallen down a garden pit, or desperately sick and out in the day. Here are details of some I have rescued, most of which thanks to quick responses, emergency care, and amazing dedication from the resuce centre I take them to, have resulted in them being 'rewilded' and living a great life in hedgehog friendly gardens:

'Fossil' - an older hedgehog found out in the day on a garage forecourt badly dehydrated with severe damage to its snout. Thanks to quick thinking and action (we always have a rescue box to hand - read more about how you can put one of these together on the Information page) with several weeks medical care at the rescue centre he survived, and was eventually released into a safe garden where he is monitored, and very much enjoying himself!

'Pitman' - rescued from a neighbouring garden where it had fallen down a pit. It was a little dehydrated and hungry, but after some tender care from myself following advice from the rescue centre, he was placed in the hedgehog house and continues to visit our garden regularly.

'Red' - a small hoglet out in the day, weighing just 346g, severley dehydrated with internal parasites. Once again, quick thinking from the people who discovered him, followed by my swift rescue then over to the volunteer rescue meant he stood a chance of survival. Sadly though, little 'Red' didn't make it - the internal infection was just too severe for him to fight, even with medication, and he passed away (pain-free and comfy) on 12th September.

'Spikey' - a hoglet weighing just 302g caught up in garden netting. Swift action by the family who found him, then cared for by myself overnight it could go to the rescue centre. Made a good recovery and now back in the wild.

'Carrie' - a hoglet weighing just 269g, made a fantastic recovery, released back in our garden where she is now a regular visitor.

'Ivan' (who we originally thought was Ivy!), resuced just before Christmas 2021 at death's door. Taken indoors for 3 weeks by a kind-hearted person who thought they were helping, but little Ivan was at deaths door weighing just 250g with internal parasites, and severely dehydrated. Emergency care given, then supported at the rescue through winter, now released into our garden in March 2022 weighing a super-healthy 817g - that really is a success story!

'Dipper' - found out in the day, weighing 338g, severely dehydrated and painfully thin. Taken immediately to the rescue centre. He had terrible internal parasite infections and just didn't have the strength to make it, sadly passing away after 24 hours of care and pain relief.

'Dylan, Delilah, Norman & Nora' - in June I was called out to a local farm where a nest had been disturbed containing 4 tiny hoglets. Following advice from the rescue centre, we waiting to see if Mum would return, but sadly she didn't, so early in the morning before school I rescued them and took them to the centre. They were tiny - just a few days old, eyes still closed, and needed intensive care. Sadly, Nora passed away after a short time, but the other three are thriving thanks to the incredible 24/7 care given from the centre. We are hopeful they will be released into the wild at some point over the Summer. 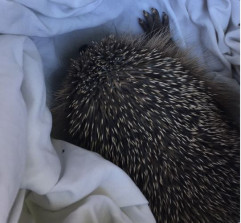 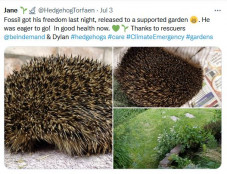 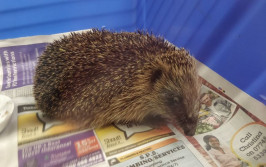 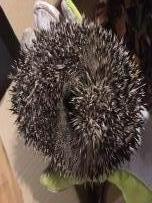 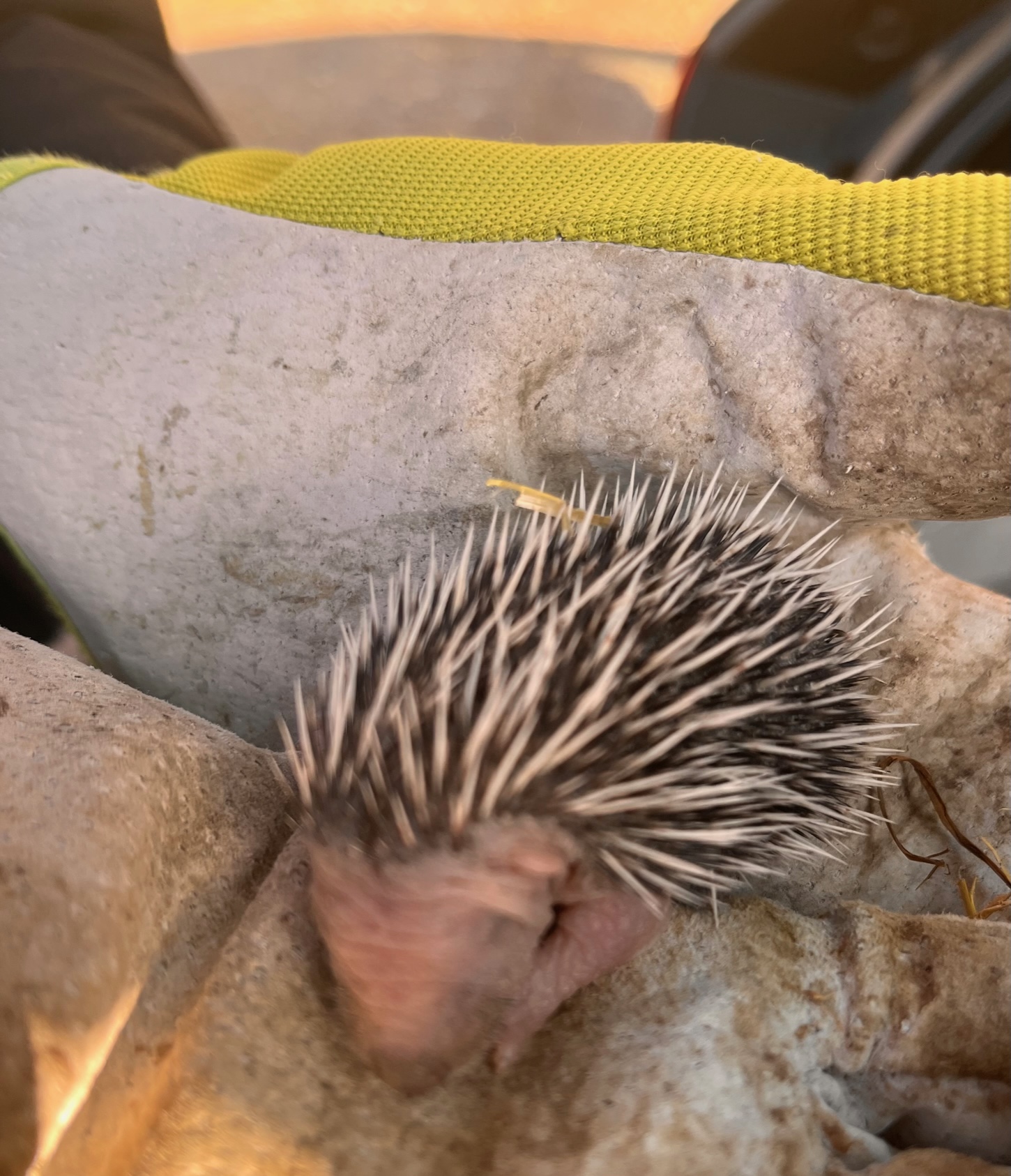 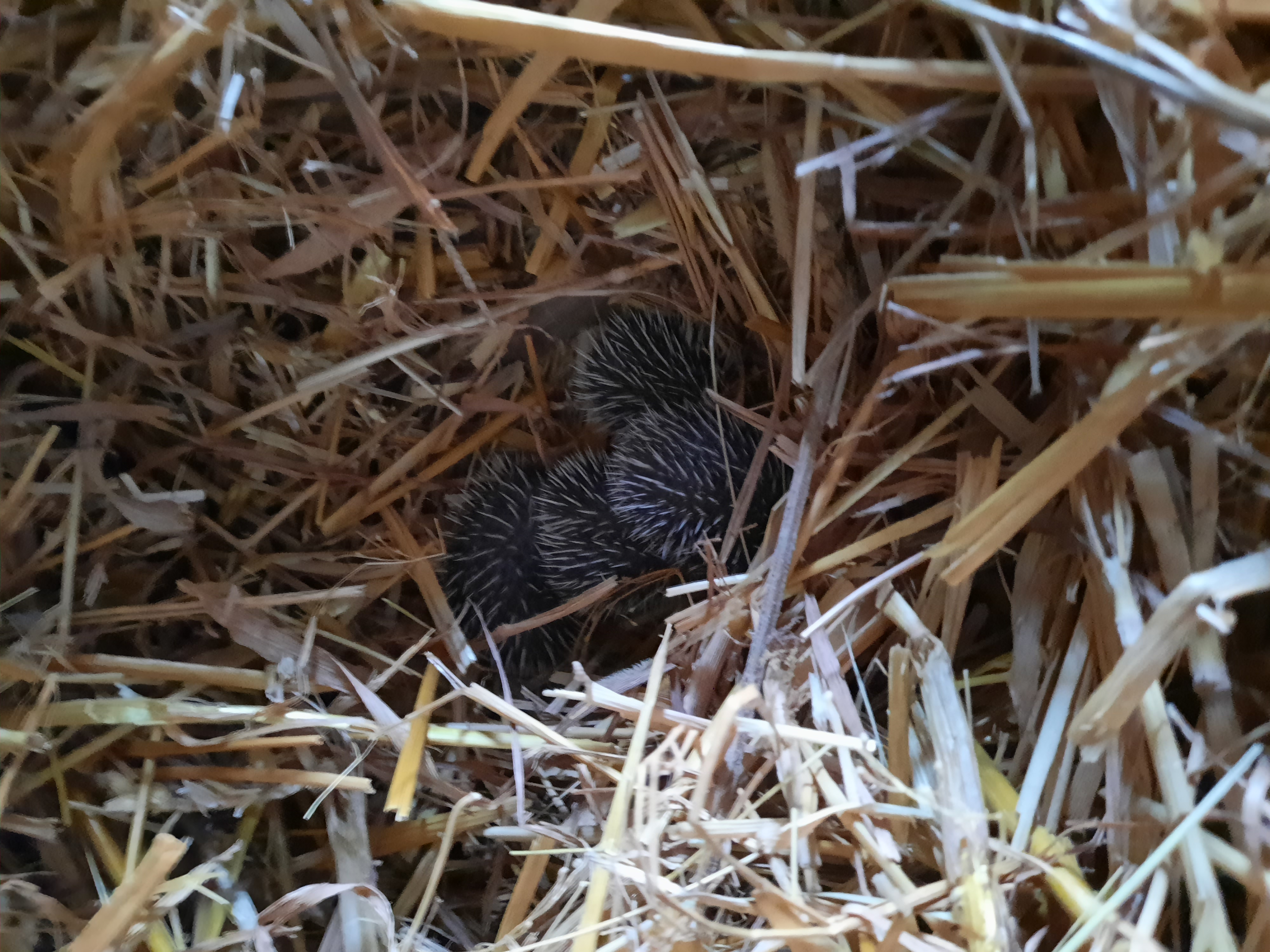 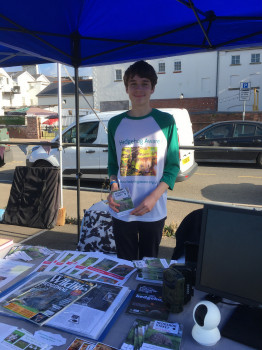 I exhibited at the ACE Climate Future Festival in Monmouth on Sunday 26th September 2021 speaking with hundreds of visitors wanting top tips on how to make gardens 'hedgehog friendly', and watching footage of hedgehogs from my night vision cameras. They also had opportunity to look inside a hedgehog house (thanks to Riverside Woodcraft) and purchase some hedgehog gift items, raising much needed funds for the volunteer rescue centre I take poorly hedgehgs to.

Since then, I have visited and exhibited at other community events, and spoken to a wide range of groups including WI, gardening clubs, and schools.

Please use the contact page to get in touch if you'd like me to exhibit and/or speak.